Stella Bottai (SB): Your role at the Pompeii Archaeological Park involves not only restoration but also conservation. Can you describe the relationship between these two spheres of intervention, and how they’re linked with maintenance?

Francesca Leolini (FL): My job title is “restorer-conservator officer”: there are nine of us at the Pompeii’s Archaeological Park with the same title and between us we cover nearly all types of restoration handled by the Ministry, and certainly all those needed at Pompeii. Meanwhile, the maintenance of the site is carried out by A.L.E.S. professionals, workmen, restorers and public-related staff who deal daily with a number of interventions on both the works and the structures that are part of them (such as gutters and gates), as well as controlling and handling the impact of human visitors on the site.

Conservation is an integral part of restoration, which happens once an object has been restored and protects it over time; it is functional to the removal of items and their display in museums, but also during storage of the item.  To conserve is to take care of an object, directly by removing dust and monitoring thermo-hygrometric parameters, but also by providing practical indications, for example relating to the packaging method for transport (only the restorer-conservator officer knows the critical points of an artifact). So while conservation is an indirect action that effects mostly environmental changes, restoration is direct action on the object which impacts on its very substance.

SB: How would you describe “archaeological material” from the viewpoint of its restoration and conservation?

FL: The substance of a work of art, particularly in archeology, is changing by its very nature, because its chemical and physical state is to constantly seek balance with its setting.  When it comes to an archaeological site, and specifically Pompeii, these ruins were obliterated for thousands of years, buried under lapilli, ash and soil; they were effectively underground, and therefore subject to water percolation, run-off, bacterial attack and the mechanical action of the roots of overlying plants, the absorption of minerals and ground slip. Once brought to the surface and the light, they are exposed to sudden thermo-hygrometric fluctuation due to sunlight, wind-induced particle erosion, rain, and the actions of atmosphere and humans in general. Many areas of Pompeii were destroyed in 1943 by bombings during the Second World War, for example. However, the anthropic effects of tourism are seen daily. As conservators, our work involves constant monitoring of these processes, which impact both decorated external surfaces and organic and inorganic artifacts in storage. Restoration work becomes necessary when the materials need to be made stabilized for greater interpretation and understanding and more secure use. On the other hand, to quote the historian and restoration theorist Cesare Brandi, “only the material of the artwork is restored”.

SB: Your specialization is in the field of organic materials, ceramics, glass and metals, and last year you headed the restoration of the recently-discovered “Sorcerer’s Treasure Trove” at the Park’s Restoration Laboratory. Can you tell us how you carry out your work in the phase between the discovery of an object and its arrival at the Laboratory?

FL: Items unearthed in Pompeii’s Archaeological Park come to the Laboratory once the archaeologists have removed unrelated soil and carried out a preliminary analysis. The work happens in synergy between the archaeologist’s knowledge and that of the restorer-conservator, who is primarily concerned with studying the find. In fact, the second stage of restoration, after photographic documentation, is historical and iconographical research, conducted with the archaeologists. First and foremost, it is vital to know from the archaeologist present at the dig the conditions in which the object was found; whether the soil was damp or dry, whether there were roots around it or nearby, whether its setting was indoors or outdoors. Together we reconstruct the story of the artifact; the more data we receive and compare, the more comprehensive the restoration. The restoration we carry out in the Laboratory is geared to “minimum intervention”, and reflects our university training, which combines the act of restoration with the use of diagnostic techniques to identify the material which is most compatible, easily reversible and non-toxic, both for the item itself and for the restorer (our laboratory uses no benzotriazole, for instance), in addition to the introduction of innovative processes or the adaptation of tools and equipment used, where necessary. Indeed, an object restored by us does not “change”, since we merely allow it to recover — at least partially — its “image”, no longer the image it had when first created, but bearing the vicissitudes it has undergone. An image that preserves a “patina of time” as precious as it is haphazard. You definitely won’t hear about objects “returned to their former glory” by us… Eugène Viollet-le-Duc’s age of reinvention and revival no longer applies to today’s archaeology in which — as previously mentioned — Brandi’s reflections have become an essential part of the literature, education and application of restoration work. As also occurred in the restoration of the “Treasure”.

SB: Of that discovery, which items do you find most exciting from a restorer’s point of view?

FL: The “Sorcerer’s Treasure Trove” found in the Domus del Giardino consists of necklace beads, apotropaic symbols and dressing table items made in a wide variety of materials: shell, glass, faience, amber, bone, precious stones and bronze. Of these, I was particularly struck by an amber talisman and a beautiful seal in vitreous paste. Amber is a fossilized resin with a glassy appearance from now extinct conifer species, the main one being Pinus succinifera. 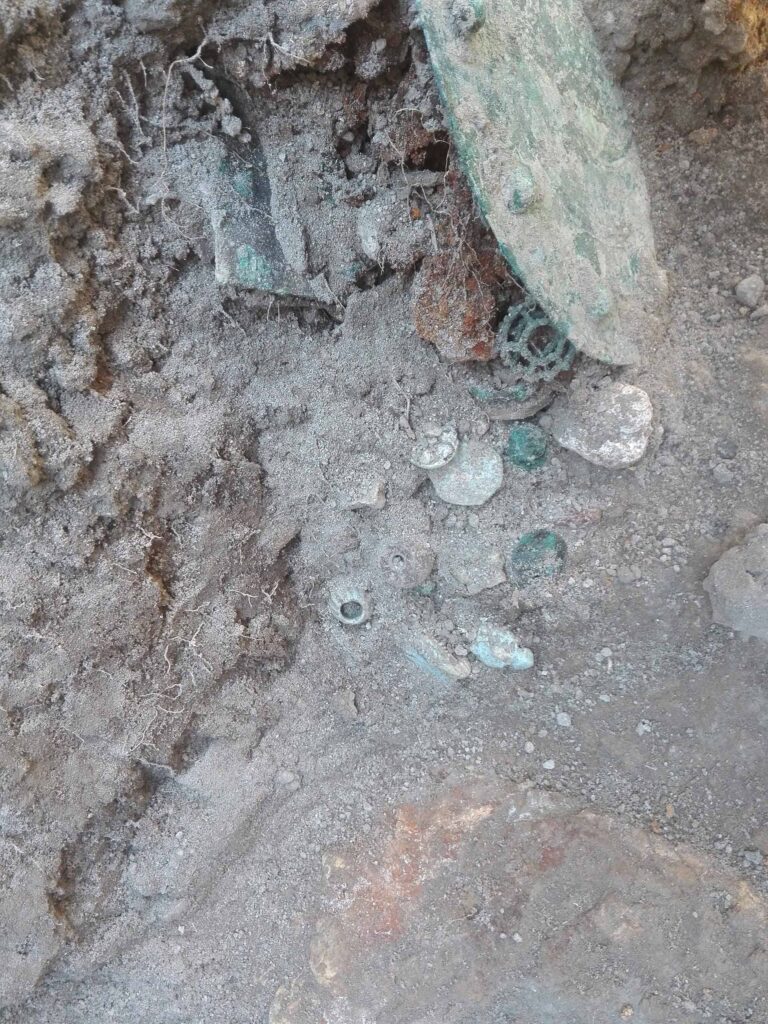 Ever since antiquity confusion reigned among educated men regarding the nature and properties of this material and various theories were formulated, often contradictory and occasionally truly bizarre. Amber is counted as a precious stone, despite being of organic rather than mineral origin. We know for sure that in the time of Pliny there were long-established trade routes (known as the “Amber Road”) to distribute amber extracted from the Baltic all over Europe, from Hungary to southern Italy.  Pliny described the nature of amber, and in chapter 37 of his Naturalis Historia (45-60 AD), he tells us:

“Amber is produced from a marrow discharged by trees belonging to the pine genus, like gum from the cherry and resin from the ordinary pine. This condenses due to cold, certain weather conditions or the sea, whose impetuous ebb of waves transports it far from islands and deposits it on beaches so rapidly that it seems to remain suspended rather than sink to the bottom.” He also tells us that there are several types, and that “The most valuable variant is Falerno, so called after the color of the wine, which has an admirable clarity, a slight sheen and a mild color of cooked honey. “ 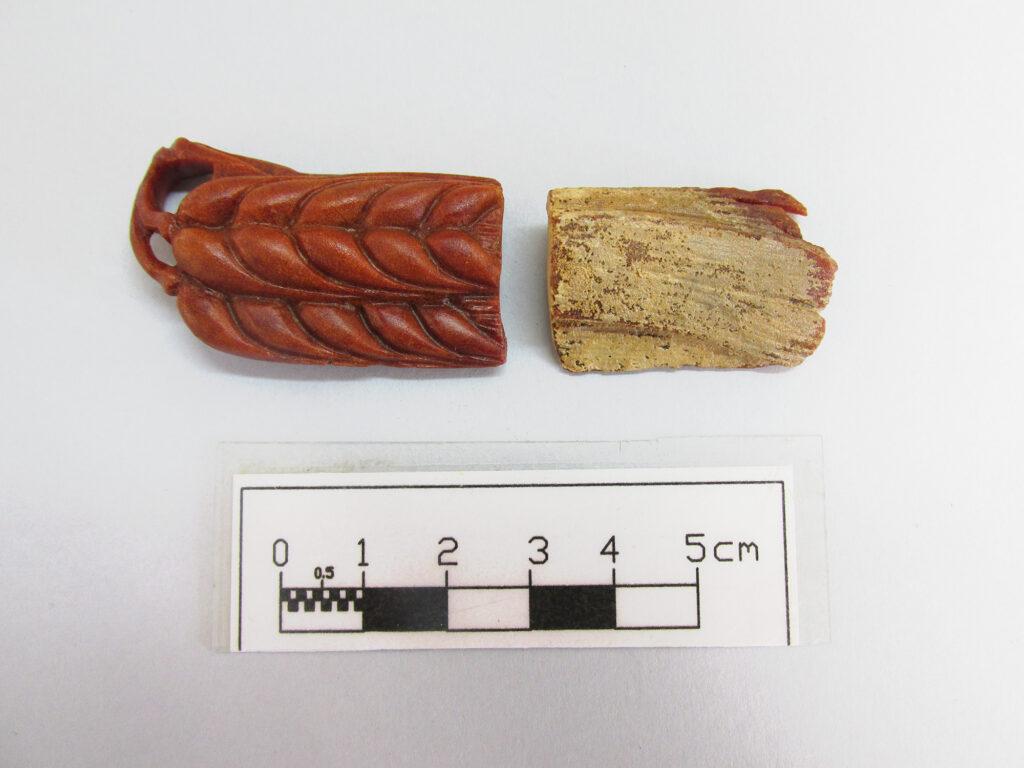 These mysterious characteristics, along with amber’s magnetic properties and golden color, led ancient scholars to attribute magical, apotropaic and medicinal properties to the substance. By virtue of this, it was used as a remedy for earache, sight loss, stomach pain, intestinal flu and bleeding. Pliny has more to say about throat infections (Naturalis Historia, 37, 44). The success of this material in antiquity is undoubtedly due to the fact that amber, as well as being of mysterious origin, is a soft material, easy to work and therefore ideal for beads and talismans. It can be cut and sculpted using tools made from bone or stone. Today we know that amber is a fossilized resin dating from the Early Cretaceous (135-65 million years ago) to the Miocene (26-7 million years ago); it is found in many places, although the main European sources are the beaches of the Baltic Sea. Chemical analysis (usually by infrared spectroscopy) is used to determine differences in the chemical composition of ambers and thus pinpoint their provenance (the “sorcerer’s” amber has not yet been analyzed). Amber deteriorates due to the binding of oxygen to the double bonds of heterocyclic methylene; in other words, it undergoes a phenomenon we call oxidation. This alteration can result in two types of physical change: micro-crazing of the surface, leading to the formation of areas that are weakened and likely to become detached, and a dusty surface, also susceptible to weakening and loss of material.  Our talisman, in the shape of an ear of wheat (or barley), was found in two pieces in the same area of zone 4 and at the same level; it is particularly interesting because the deterioration is varied: one half was oxidized, dry and dusty, while the other was in an excellent state of preservation. We therefore had to take a selective approach to the restoration of the item. On the oxidized part we used an acrylic micro-emulsion applied in several layers, gradually checking the ongoing stabilization and repeating the operation until the surface lost its dusty appearance. The better-preserved section, however, did not need in-depth stabilization, only surface protection. The two parts were not stuck back together because their varying appearance — also different on the split, whose surface is polished and worn rather than sharp — suggests that the item was already broken before the catastrophe of 79 AD. Lastly, what fascinated me was the symbolism of the ear of wheat: the plant symbolizes the cycle of rebirth and, since the seed remains buried underground until it germinates in spring, the talisman represents the passage of the soul from darkness to light. It is also a symbol of fertility.

But in my opinion, the most beautiful object in the “Sorcerer’s Treasure Trove” is a seal. Judging from the type of deterioration apparent and the presence of air bubbles clearly visible to the naked eye, this is a cabochon of vitreous paste, negative carved and depicting a dancing satyr, a figure surely known from the bronze sculpture of Mazara del Vallo, to which this item bears a remarkable resemblance in terms of style and anatomy. 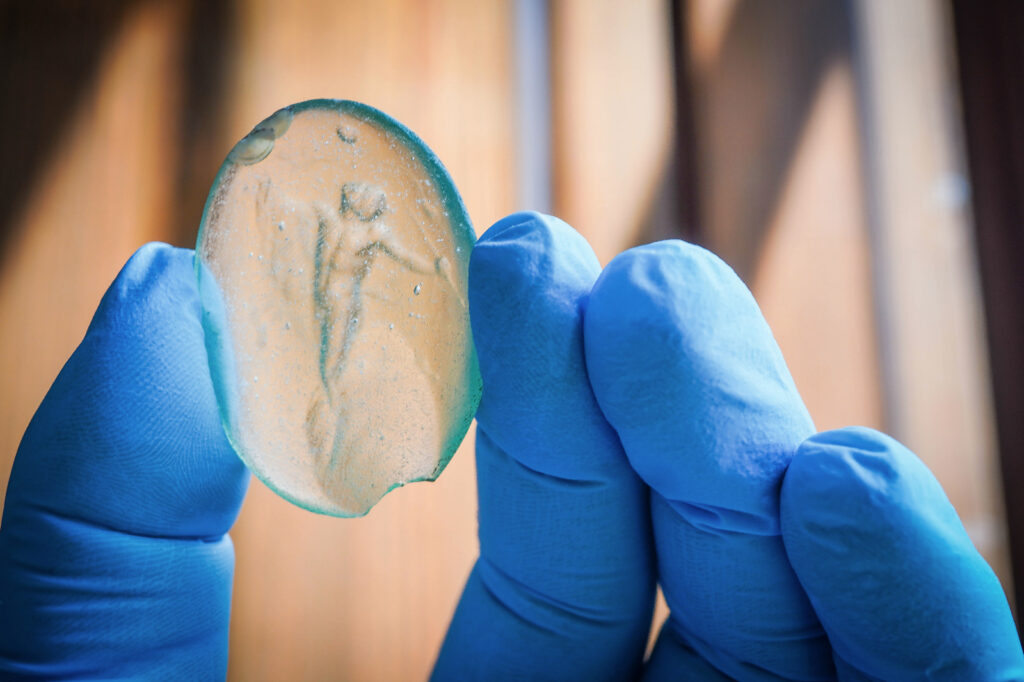 It has the same fluid shape as the bronze statue, and the curve of the back, which gives the satyr’s leap its momentum, accentuates the abdominal and oblique muscles. The hair resembles small waves blown by the wind, as does the ribbon hanging from the cone of the Bacchus-like thrysus clutched in his right hand; his left arm is covered by a nebris or fawn skin, and the left hand holds an object that may be a kantharos, or wine cup. The head leans backwards and to the right, suggesting he has just leapt onto the right foot, bending the left knee. The face and gaze are turned upwards, obviously in the throes of Dionysian enthousiasmos… the person who carved this managed to render the ecstatic expression of a trance-like state with a few tiny and careful strokes. Unfortunately considerable chipping prevents us admiring the bottom half of the legs; it’s almost as if this satyr has suffered the same fate as the Mazara one. The seal was probably mounted in an oval bronze casing, of which a section has been found. With precious stones the restoration we carry out is limited to immediate cleaning using demineralized water and cotton wool.  To quote the recently-departed Professor Mario Torelli, “As a symbolic representation of its owner, the seal conveys fairly directly the self-image that the owner seeks to show the world, or in any case displays the values he identifies with and which, according to his belief system, make him instantly recognizable in the eyes of those who admire his seal.” And those eyes included mine, as I was restoring it.