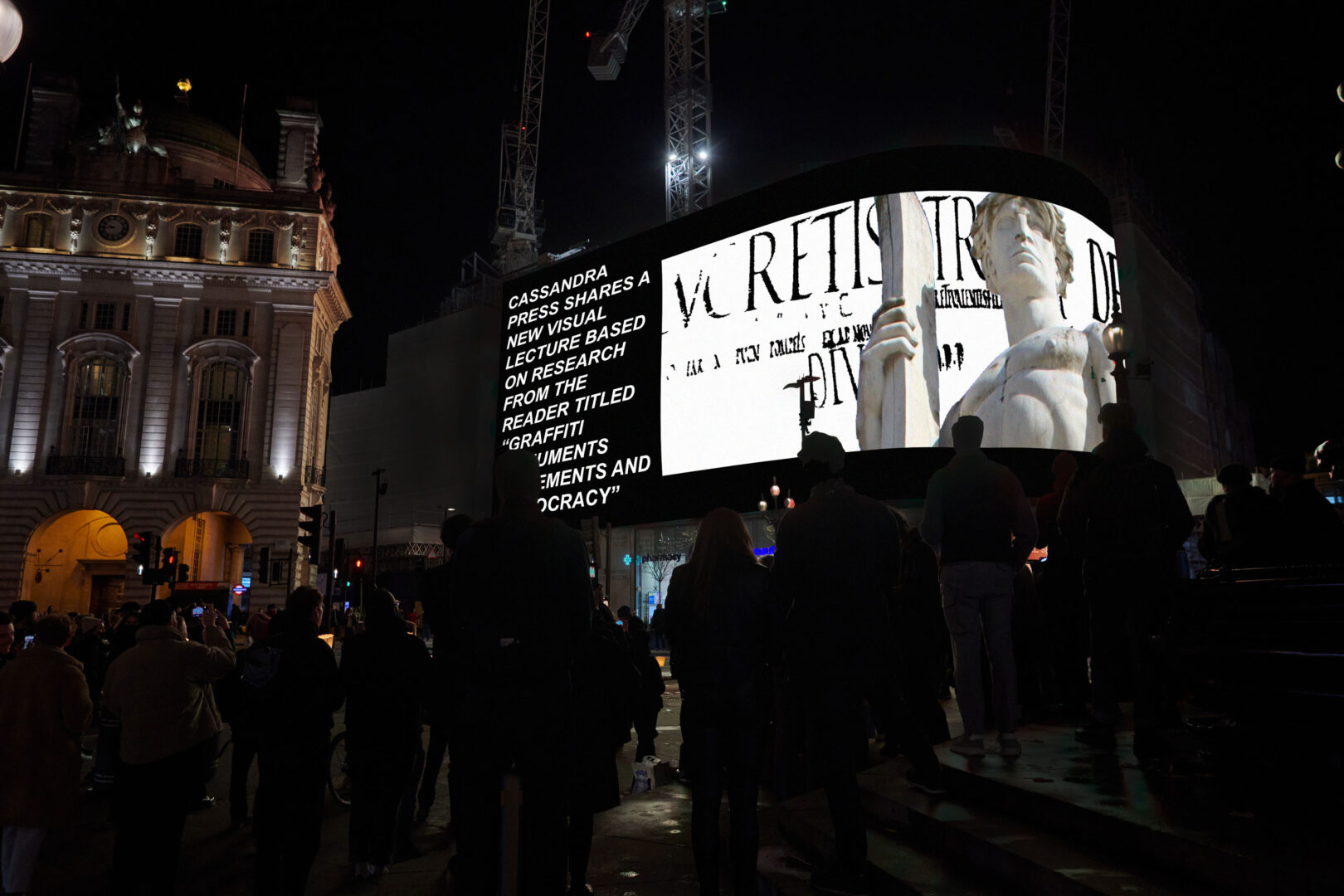 From the ancient streets of Pompeii to billboard screens around the world, CIRCA and Pompeii Commitment. Archaeological Matters present new work from Kandis Williams’ Cassandra Press

A historic first, CIRCA and Pompeii Commitment. Archaeological Matters present A Monument A Ruin by Cassandra Press, a publishing platform founded in 2016 by critically acclaimed artist Kandis Williams. The new work – a short video-lecture in which ancient street inscriptions collide with contemporary protest graffiti to question the nature of monuments – will appear every evening at 20:22 on London’s iconic Piccadilly Lights and broadcast across a network of screens in Los Angeles, Milan, Melbourne, New York, Seoul and Tokyo.

In the wake of Black Lives Matter’s global uprisings in 2020, the use and symbology of graffiti in public spaces have taken on new and powerful significance prompting an urgent reflection on the meaning and manifestation of “collective history” in the public domain, particularly in the context of modern monuments, memorials and statues tied to slavery and colonialism.

A Monument A Ruin draws on the recovery by archaeologists of an exceptional amount of tituli picti – an ancient form of urban graffiti, including slogans and electoral propaganda (programmata) – painted across the streets of the ancient Roman city of Pompeii, buried under volcanic ashes in the eruption of Mount Vesuvius in 79AD. These inscriptions provide a dense narrative of the daily concerns of Pompeian society, including the political agency of groups such as women and slaves who were not permitted to vote.

In Cassandra Press’ new commission for CIRCA, the ancient street markings are overlaid with contemporary issues of political agency and visibility of socially oppressed groups in today’s Western societies. Evolving from Williams’ participation in Pompeii Commitment. Archaeological Matters – the first research and contemporary art programme commissioned by the Archaeological Park of Pompeii –, A Monument A Ruin constructs a complex composite of layered photographs, footage, texts and audio that unravel with movement and dialogue to bridge the past and present into simultaneous focus. Photographer Brandon English collaborated with Cassandra Press on a new series of photographs shot in situ at Pompeii over two nights in Summer 2021, projecting his visual accounts of the protests and assemblies in 2020 by New York abolitionist groups onto different buildings and frescoes in Pompeii, and now appearing on buildings around the world this February.

In keeping with the CIRCA 2022 manifesto ‘AND NOW WE BUILD WORLDS’, this timely new work questions what new possibilities can emerge out of the ruins of monuments passed.

Josef O’Connor, Artistic Director, CIRCA, comments: “Cassandra Press’ new work builds a bridge spanning almost 2,000 years between ancient Pompeian programmata and contemporary protest graffiti to help us in understanding ruptures as generative opportunities for change. What began as a research project in Pompeii has developed into a global public art commission. A Monument A Ruin examines political agency in public space, past and present, and we are incredibly proud to be able to present this timely commission on the CIRCA platform, broadcasting across seven cities around the world this February. We are grateful to Kandis Williams for her vision, Brandon English for his photos and Pompeii Commitment. Archeological Matters for this historic collaboration.”

Gabriel Zuchtriegel, Director General of the Archaeological Park of Pompeii comments: “The new work A Monument A Ruin by Cassandra Press is a testament to Pompeii’s contemporaneity as a living and transformative heritage site, revealing traces of human concerns that cross through millennia and echo in our present time. Innovative investigations by international artists, such as Kandis Williams, are truly fundamental to nurturing the contemporary value of the Archaeological Park of Pompeii as an active research centre generating and sharing new knowledge that gives a voice to audiences worldwide and to contemporary life. We are pleased to collaborate with CIRCA, whose global platform reflects the values of inclusivity and communitarian participation pursued in all our activities and programmes.”

Stella Bottai, Co-Curator of Pompeii Commitment comments: “We are thrilled to see Cassandra Press’ new work come to life as the culmination of a year-long collaborative journey that started with the launch of the new contemporary art programme at the Archaeological Park of Pompeii. We are grateful to Kandis Williams for her bold ideas, which place the unique Pompeian heritage in dialogue with the urgent global conversations of our time. Introducing Brandon English’s photographs into the nocturnal landscape of the archaeological site produced a new visual symbology, one that empowers Pompeii with the trans-temporal, phenomenological possibility to be a testimony and a rupture at once. Presenting these visual compositions on CIRCA’s public screens worldwide, at the heart of modern cities, provides an opportunity to further reflect on the links between the Pompeian programmata and contemporary graffiti, as highlighted by Cassandra Press’ innovative research.” 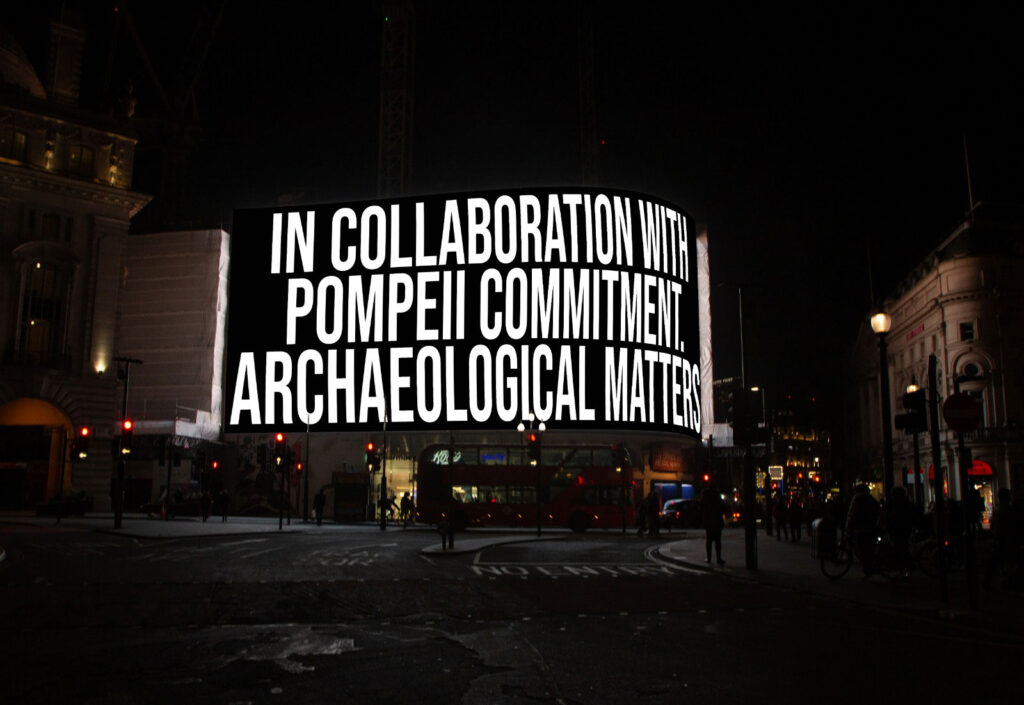 Kandis Williams is a visual artist whose practice spans collage, performance, writing, publishing, and curating. She explores and deconstructs critical theory around race, nationalism, authority, and eroticism. Her work examines the body as a site of experience while drawing upon her background in dramaturgy to envision spaces that accommodate the varied biopolitical economies, which inform how form and movement might be read. Williams establishes indices that network parts of the anatomy, regions of Black diaspora, as well as communication and obfuscation, relaying how popular culture and myth are interconnected. The artist is also the founder and editor-at-large of Cassandra Press, an artist-run publishing and educational platform producing lo-fi printed matter, classrooms, projects, artist books, and exhibitions. The platform’s intention is to disseminate ideas, distribute new language, propagate dialogue- centering ethics, aesthetics, femme driven activism, and black scholarship.

Founded in 2016, Cassandra Press is an extension of the multidisciplinary practice of Kandis Williams. What began as a publishing platform to highlight texts on issues of race, feminism, power, and aesthetics, Cassandra Press has since grown to become a multifaceted educational resource, hosting virtual workshops and organizing artist residencies alongside its publishing program. Over the past five years, Cassandra Press has published thirty-one readers which function as spiral-bound anthologies presenting theory, history, sociology, and criticism by a panoply of intellectuals, activists, and editorial sources. In 2020 the platform began the Cassandra Classrooms project, a series of immersive courses led by artists, intellectuals, and educators who share their vital knowledge and invite participants into generative investigations. Classroom sessions thus far have featured Manuel Arturo Abreu, Rhea Dillon and Yaniya Lee, among many others.

CIRCA
CIRCA is a digital art and culture platform with purpose. They stop the clock on global media spaces every evening at 20:22 and mobilise the world’s greatest creative minds to broadcast unique works that consider our world today, circa 2022. The funds we generate from artist print sales drive the #CIRCAECONOMY – a circular model that supports our free public art programme and creates life-changing opportunities for the art & culture community. Since launching in October 2020 on London’s iconic Piccadilly Lights, CIRCA has commissioned new work from rising and established artists including Ai Weiwei, Cauleen Smith, Eddie Peake, Anne Imhof, Patti Smith, Tony Cokes, Emma Talbot, Vivienne Westwood, James Barnor, David Hockney, and more.
CIRCA has been made possible by Landsec, landlord of Piccadilly Lights, who have kindly donated media space, as a helpful boost to the cultural scene in London’s West End. CIRCA are grateful to Piccadilly Lights, Ocean Outdoor, Yunika Vision, CJ Powercast, Luxottica, Fed Square, Pendry West Hollywood for their support this month in supporting our free public art programme.