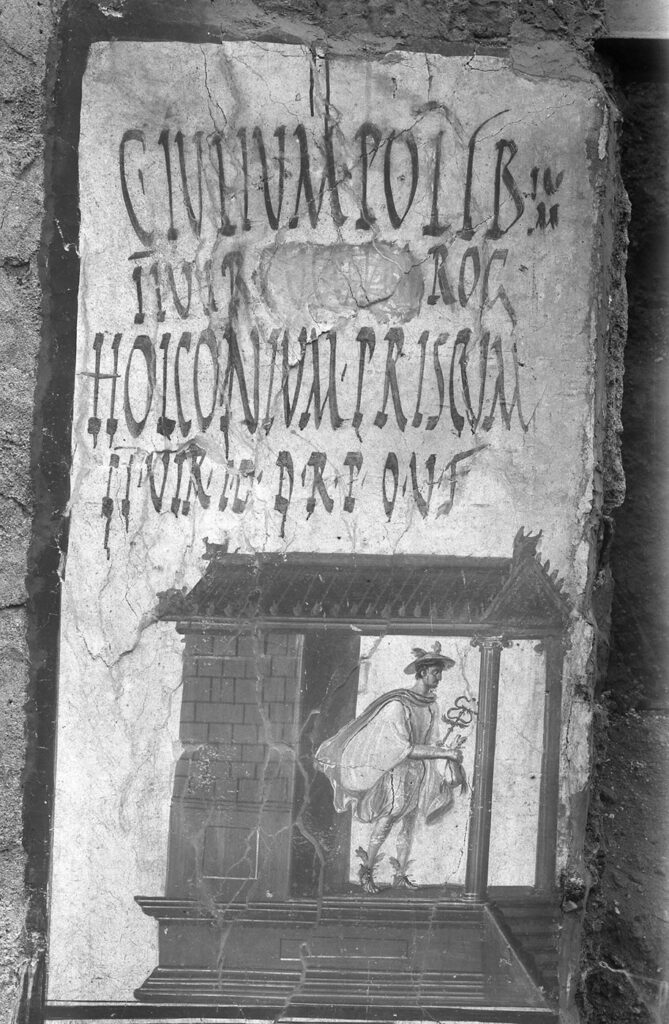 Electoral registration in favour of Giulio Polibio, in which the name of Cuculla can be clearly seen erased with mortar. Courtesy Archaeological Park of Pompeii 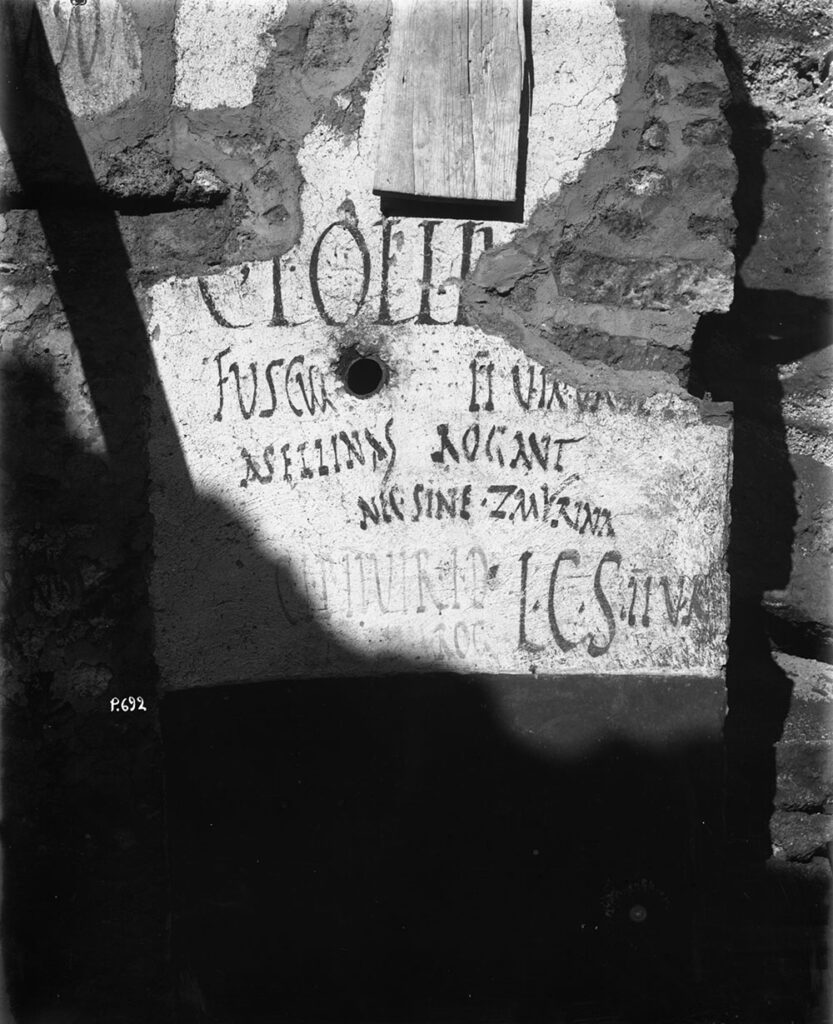 Inscription that the Aselline place in favour of Lollio Fusco, photo from the early twentieth century. Courtesy Archaeological Park of Pompeii

Very comfortably-off and well-established in Pompeii, where they certainly generate economic interests, this family is now seeking visibility, and this, in the closed circle of a “provincial” community, can only be achieved by being accepted in the restricted elite of those holding political power, i.e., the city’s prominent figures.
The frantic endeavour of these two men named Iulius, newcomers to Pompeii, to create an electoral consensus so as to commence their rise to power already seems discernible from their house. Although maintaining its austere appearance, it has three electoral inscriptions for Polybius as magistrate placed inside, and, on the far side of the peristyle, there are three large intercommunicating triclinia, indicating a need on the part of the owner to gather a large and indeed considerable number of guestsaround him frequently. Opposite the tablinum of the house’s secondary atrium, moreover, where the professional “study” of the dominus was probably located, there is a large waiting room where the crowd of clientes waiting to be received were seated, so that they were not left to wait outside, in the sun or outdoors, on those benches commonly found outside the main houses of the Pompeian nobility.
A clear need for consensus, which resounds and is clarified by the reference to the electoral messages, which show our Polybius intent on establishing political alliances with the most prominent families of Pompeii, and the holders of political power for generations, with whom he, even as a homo novus, seeks to fit in, almost as though he were heir to the traditions of the ancient Pompeian bourgeoisie, and to whom he has given the support of the votes of his clientele in the course of the years as part of a precise strategic plan aimed at securing their support when he decides to run for the office of magistrate.
A candidacy which, among other things, has a large electoral support base. In addition to the unwavering vicini (neighbours), there are the powerful guilds of muliones (mule drivers) and pistores (bakers). Indeed, he must have been extremely interested in baking, if one poster praises him as a studiosus et pistor (a man of culture and a baker), and the findings from the house show him to be a refined art collector, while another poster, with a brilliantly saucy double entendre, ensures its readers that he panem bonum fert (offers good bread). 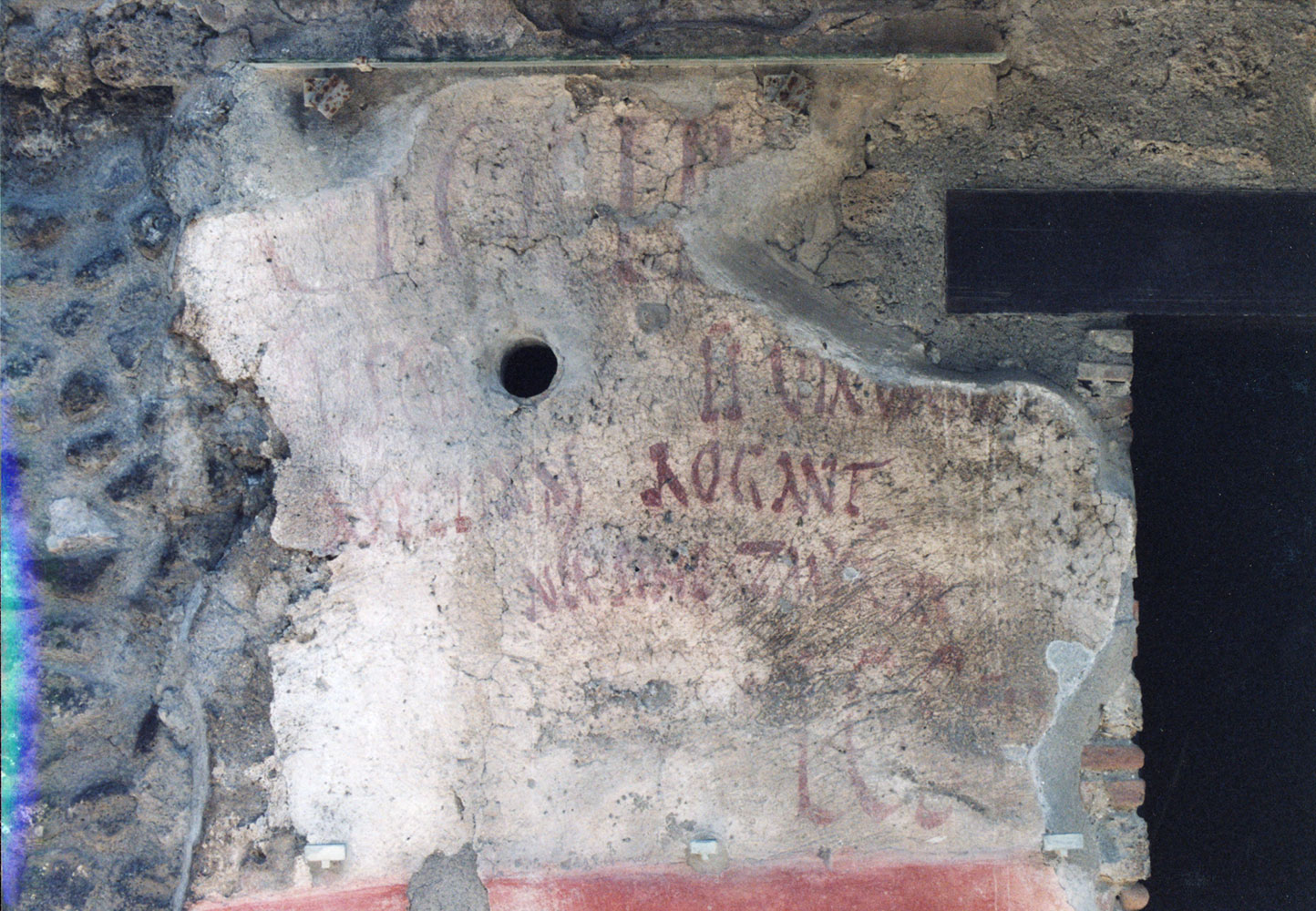 Inscription that the Aselline place in favour of Lollio Fusco, photographed in the current state of conservation. Courtesy Archaeological Park of Pompeii

Perhaps this was the reason why he, as a candidate, had to leap into action to fend off a blow which, although unintentional, might have been detrimental to his victory. In fact, he rapidly had the names of two women with less than impeccable morals, who had dared to take a public stand in his support, covered with a layer of white lime: one, Cuculla, whose name, “Cowl,” already reveals her erotic speciality and on whom we have no further information; the other, Zmyrina, “the girl from Smyrna,” who, together with the equally exotic Aegle and Maria, was supposed to entertain the customers with exquisitely feminine arts in the nearby Thermopolium of Asellina, and who was perhaps admired every morning as she passed in front of the Polybius’s shop surrounded by her entourage on her way to the Forum. Not that our Polybius was, by any means, a misogynist. In fact, we see him willingly accepting among his supporters women named Fabia, Lollia “along with his own,” Chypare and Specla. Women were not, of course, entitled to vote, but the power that they have always wielded in human affairs is no secret. But perhaps these two women had gone too far in presenting themselves as his supporters. These women, with their way of life, lavishing praise on him, the propagator of ancient customs, the preserver of ancestral traditions! It would have been counter-productive to accept their support; it might have undermined the moral character he had been patiently constructing over the years. Much better to have an errand boy slink out during the night to cover the names of those two inopportune women on the election messages.
So, what judgement does our Polybius deserve? A social climber, therefore, but also a shrewd politician; an old-fashioned conservative, but attentive to the needs of those seeking his help; a moralist in name only, certainly not a zealot; a reckless man capable of daring manoeuvres in politics, but able to deliver benefits to his base; a man who is undoubtedly rich, but definitely not penny-pinching, ready to squander his money, as long as he has something to gain from it; a pleasure-seeker, but with a certain restraint, also capable of appreciating and enjoying the beauty offered by his own vision of art.
But what became of our Zmyrina? What could she do, a woman, a slave, of easy virtue to boot, against such a rich, powerful man, with connections in high places in Pompeii? The poor girl is forced to hold her tongue and suffer the formal disgrace of having her name erased, a true death in effigy. But the story does not end here. On the contrary, it has an unexpectedly happy ending that demonstrates how the astuteness of women, irrespective of their social status, can enable them to take revenge with elegance even against unchivalrous power.
In a subsequent election, the son of one of the oldest Italic families decides to run for office. His name is Caius Lollius Fuscus and he certainly has no need to “elbow and jostle” his way to the forefront of local politics, so he probably smiles indulgently when perhaps, but it is fair to assume,the girls of Asellina’s thermopolium ask him discreetly for permission to support his candidacy.
Of course, we will never know whether this actually happened or not – we can only state the facts.
On the facade of their thermopolium one morning the following electoral inscription appears: “The girls of Asellina urge you to vote for Gaius Lollius Fuscus as aedile,” followed by an explosive scholium: “And Zmyrina is one of them.”
Vengeance is complete. The girl’s name is publicly rehabilitated and all that Polybius can do is learn how a real gentleman behaves.