Lawrence Weiner.
THINGS THROWN ONTO
THE BAY OF NAPLES

Lawrence Weiner defines the means of expression in his art as “language + the material referred to.” He essentially means that his language, as it is presented, is sculptural, and it is the building material of his work. His first artist’s book, Statements (1968), contains 24 works whose statement for Weiner was more important than a mere physical realisation. Words, in terms of their concise meaning, are therefore more relevant than objects in and of themselves. Their interpretation, their meaning, is entrusted to the observer. In this sense, Weiner explores language as a resource for the imagination: the content of his epigrammatic phrases triggers a process capable of creating an image, a situation or a scenario in the mind of the spectator who, by reading, imagining and perceiving the artist’s presentation, actually creates his/her own version of the work. And it was, after all, from his daily observation of graffiti on the walls of his South Bronx neighbourhood in New York that Weiner drew this inspiration: “I didn’t have the advantage of a middle-class perspective. Art was something else; art was the notations on the wall, or the messages left by other people. I grew up in a city where I had to read the walls; I still read the walls. I love to put work of mine out on the walls and let people read it. Some will remember it and then somebody else comes along and puts something else over it. It becomes archaeology rather than history.”
An imaginary archaeology was activated in works that the artist exhibited at the Galleria Alfonso Artiaco – at its Neapolitan premises in Palazzo Partanna in Piazza dei Martiri – from 6 February to 21 March 2009, on the occasion of his solo exhibition The Bay of Naples. Of the five statements covering the walls of the gallery, all referring to conceivable actions in the Bay of Naples – STONES SKIPPED ACROSS THE BAY OF NAPLES, PILES OF USED MARBLE BREAKING THE WATER OF THE BAY OF NAPLES, RAFTS OF CARVED WOOD FLOATED ACROSS THE BAY OF NAPLES, MOLTEN COPPER POURED ON THE RIM OF THE BAY OF NAPLES – the artist selected the following for his contribution to Pompeii Commitment: THINGS THROWN ONTO THE BAY OF NAPLES.
This work – originally applied using vinyl letters on the gallery wall – establishes a tension between the dimension of the language used and its material equivalent. Weiner’s typography and graphic arrangement show the motif of the curve, for example, and evoke both the coastal inlet and the trajectory of an object thrown towards the horizon. The specificity of the context for which the work was conceived – the Gulf of Naples, on which the ancient city of Pompeii also stands – resonates within a dialectic between realistic reference and conceptual abstraction, local datum and global datum. The same dialectic that Weiner’s contribution to the pompeiicommitment.org portal raises the work’s presentation to a higher level of experience. First by asking an observer, the photographer Luciano Romano, to take a few photographs of the action announced by Weiner, as if to verify and provide an example, among those infinitely possible, of the chain of interpretations that his works trigger. And, at the same time, providing a further version for the observers of the digital portal of the work initially created on the walls of a physical space. The artist takes the definition of the “splash page” of websites literally, and uses it to illustrate the action of throwing a few objects into the Bay of Naples, so that the statement, the photographic image and the technological device that communicates it all coincide. AV

Although he identifies himself as a sculptor  rather than a Conceptual artist, Lawrence Weiner (New York, 1942 (lives in New York and Amsterdam) is one of the central figures of the Conceptual Art movement, which since the mid-1960s has expanded the traditional concept of the work of art in the Western art scene to include, among its materials and artistic procedures, language, performance, environmental intervention, and photographic and filmic recording. For Weiner, the work of art becomes a thought device that exists in relation to the subject who observes it and to the context in which it is presented, thereby involving both the spectator and space-time in which the work is experienced as active players in the construction and interpretation of the work itself. After making his debut in 1967 with works that consisted of specific actions accompanied by a description of the gesture of the action itself, Weiner shifted in the late 1960s and early 1970s to a radical use of the written word as his main expressive medium, producing works in the form of short sentences that interact with a given context, whether it be an exhibition space or a space connected to the public dimension external to galleries and museums. A wide variety of media – such as installations with letters applied or painted on walls,  panes of glass, sound,  film, artist’s books, posters, three-dimensional objects, graffiti, tattoos, online projects… ad infinitum – become so many ”sites” in which the works of Weiner manifest themselves materially, in typefaces that the artist himself has designed and with which he visually identifies all his works. But these works exist beyond their individual material manifestation: their formalisation always depends on the spatio-temporal conditions that host the work and the viewer, which vary according to the different conditions. While the concept of ‘context’ thus plays a leading role, its interpretation is not, however, limited to the physical context, but also encompasses the idea of its linguistic and cultural context. In fact, many of his works present the original wording in English as well as it’s translation in the language where the work is being exhibited, thereby presenting an ever-changing interaction between language, space-time and the viewer, whom the artist seems to address, defining his works as “a universal common possibility of availability.”
Solo exhibitions have been dedicated to him in recent decades by important public institutions such as, among others: Holstebro Kunstmuseum, Denmark (2021); Jewish Museum façade, New York City (2020–21); Museo Nivola, Orani (2019); Kistefos Sculpture Park, Norway (2018); Pérez Art Museum, Miami and Milwaukee Art Museum (2017); Kunsthaus Bregenz (2016); Roswitha Haftmann Foundation and Blenheim Palace (2015); Stedelijk Museum, Amsterdam (2014); MACBA – Museu d’Art Contemporani de Barcelona (2013); M HKA-Museum van Hedendaagse Kunst Antwerpen, Antwerp (2011); Haus der Kunst, Munich (2007, the same year as the retrospective organised by Whitney Museum of American Art, New York and MoCA-Museum of Contemporary Art, Los Angeles, travelling K21 Kunstsammlung Nordrhein-Westfalen, Düsseldorf); Tate Gallery, London (2006); Museo Tamayo Arte Contemporáneo, Mexico City (2004); Kunstmuseum Wolfsburg and Deutsche Guggenheim, Berlin (2000); Walker Art Center, Minneapolis (1994); Hirshhorn Museum and Sculpture Garden, Washington, D.C. (1990). Weiner has taken part in four editions of Documenta (1972, 1977, 1982, 2012) and the Venice Biennale (1972, 1984, 2003, 2013), the Istanbul Biennial (1995, 2015) and the São Paulo Biennial (2006).

Lawrence Weiner.
THINGS THROWN ONTO
THE BAY OF NAPLES 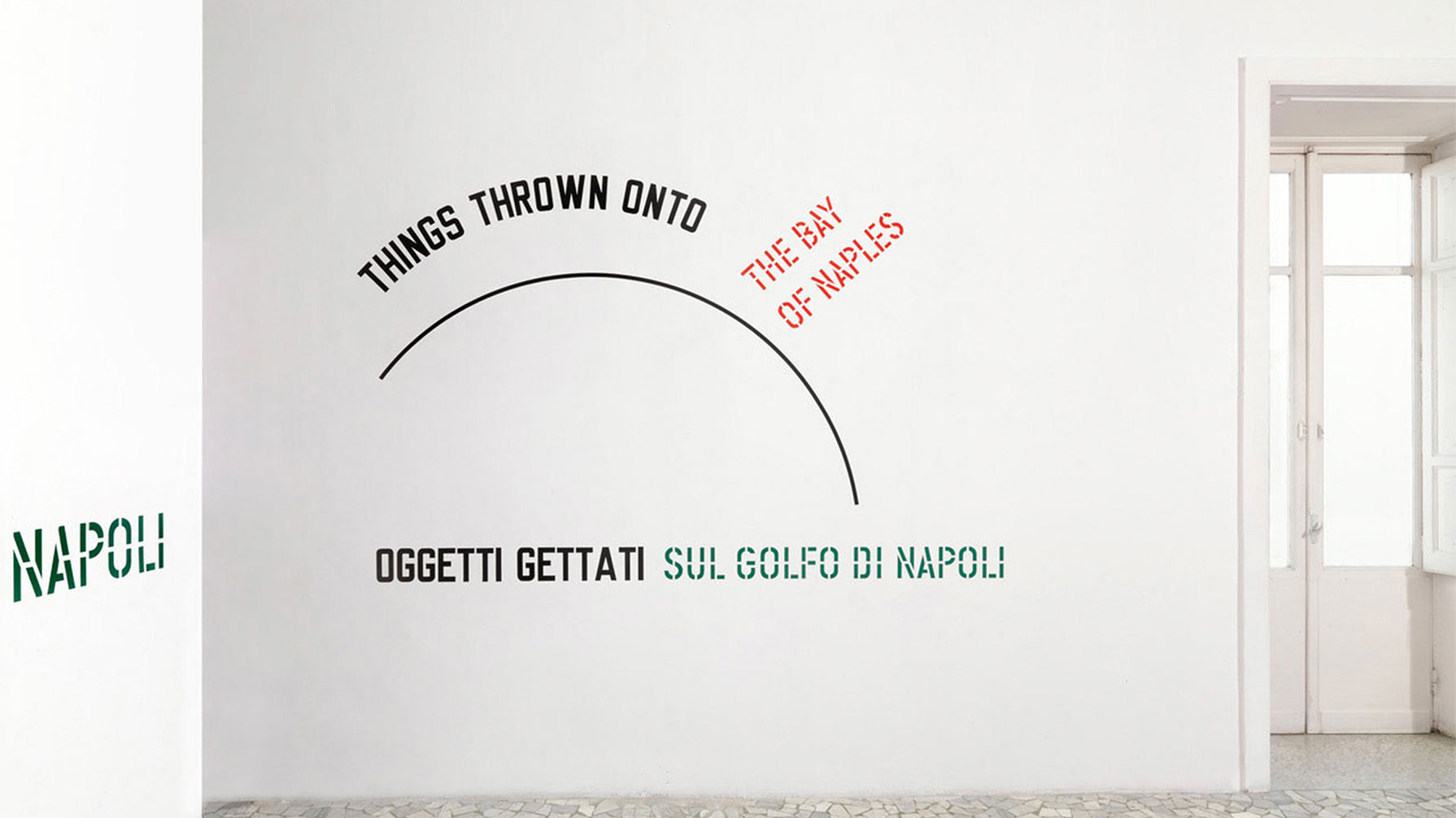 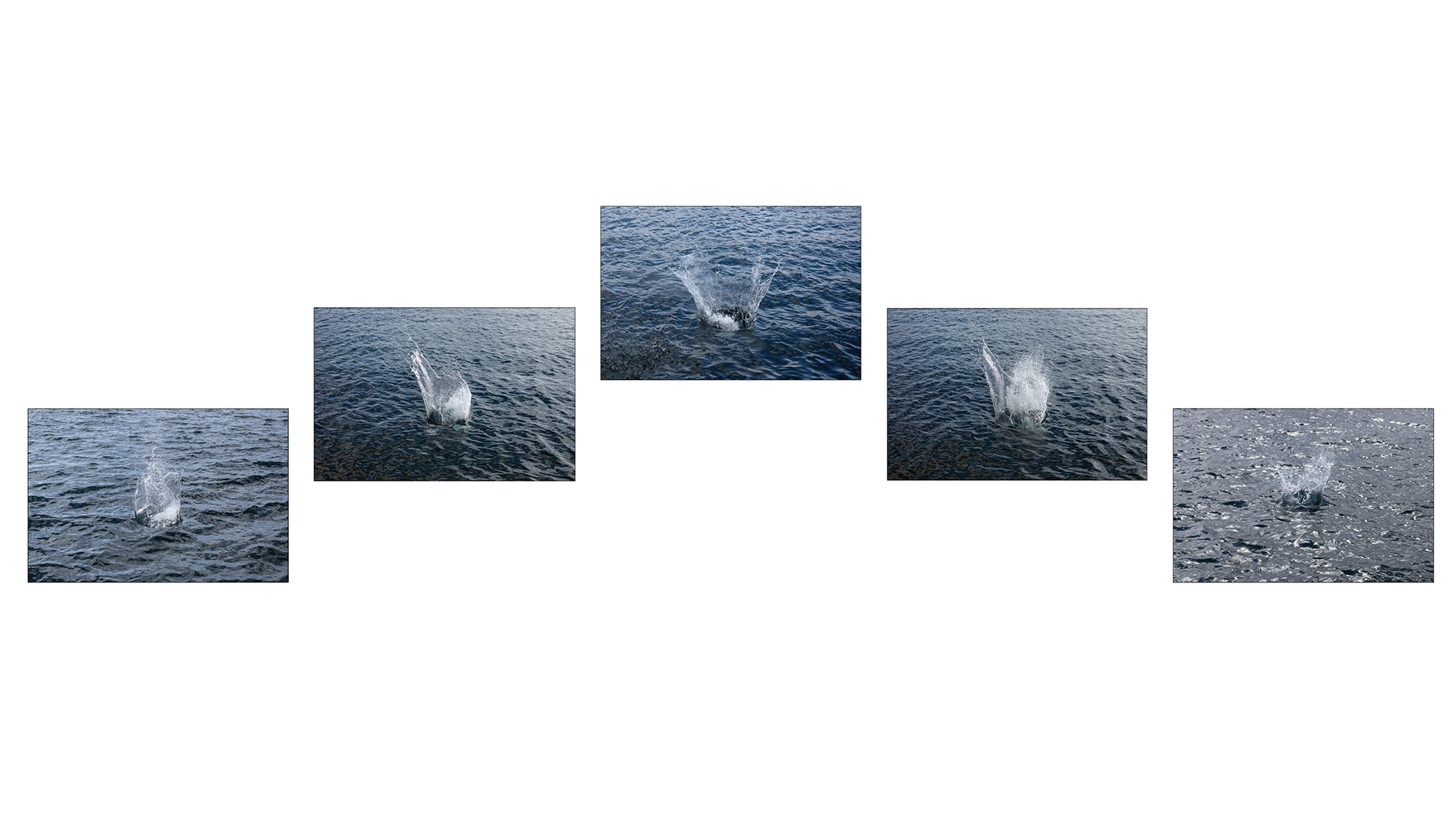