2. “A Story of Friendship and Nature. Letter to Andrea Viliani, for a Project at Pompeii” in Luca Cerizza, edited by, Gianni Pettena: 1966-2021, Mousse Publishing, Milano, 2021
© Mousse Publishing

From the very start of the project in the summer of 2020, “anarchitect” Gianni Pettena has contributed to the construction of Pompeii Commitment. Archaeological Matters, a project based on the research and combination of different disciplines and expressive forms, and, just like the ancient city of Pompeii buried in 79 AD, and rediscovered in modern times from 1748, has configured it as an authentic anarchitecture ante litteram, both real and fiction, constantly designed and re-designed.
In the months preceding the launch of the portal www.pompeiicommitment.org the Archaeological Park of Pompeii worked with three other institutions (Kunst Meran Merano Arte; Centre for Contemporary Art Luigi Pecci in Prato; MAXXI Architecture/MAXXI-National Museum of 21st Century Arts, Rome) on the production of the retrospective book Gianni Pettena. 1966-2021, edited by Luca Cerizza and published by Mousse Publishing, Milan. In the volume – which like a timeline crosses the whole biographic and intellectual corpus of Pettena’s research – Pompeii represents the project not yet completed, and thus the perspective of the future, in-progress and in the making. On pages 88–89 and 220–21 Pettena published the premises and first sketches of the project which, during 2021 (hypothetical end date of the volume, but at the time of its publication still in the future), he created and donated to the Park collection. In these pages, Pettena traces the genesis of a work that does not exist yet, born from the observation and in the memories of another artist, Walter Pichler. Remembering the time he visited Pichler’s home-studio in Burgenland – on the border between Austria, Italy and Slovenia – in the company of architect Alessandro Mendini, Pettena tells how his artist friend had drilled two holes in the room in his studio, so that whenever it rained the water could easily filter inside, and having flowed under a seat built into the wall, allow you to perceive what was happening outside, thus placing the studio in contact with the world beyond it. A penetrability of the architectural membrane evoking firstly the biodynamic architecture of the domus in Pompeii, also described by Le Corbusier in the early 20th century in his travel diaries. The indication of a form of living and building in unison – between human beings and between the cultural and natural dimension – also incarnates the memory of a biographical relationship, becoming a material memory focusing, in Pettena’s own words, “on the pleasure of living this life which, when mostly lived, allows us to sit and remember what we thought and felt, what happened, what we leave behind”. Projects and memories that can “return to physicality”, rebuilding the “memory of a memory”, telling others about them once more and seeking to capture their resonances. In this way, Pettena gives both physical and hypothetical consistency to our experience of space and time, telling us how they are constantly remodelled by our action and our thought. His memory uses the Pompeian casts, the matrix of his work-in-progress for Pompeii, an architecture of voids, or also a potential anarchitecture. To inhabit this unstable, multiple space and time, Pettena thus designs a cast of his own body sitting with his arms wide (almost as if measuring the space at his disposal), immersing in a mass consisting as much of the plastic material of his cast as the reactivation of the memory of his friend. In the following months, just after completing the work, he had his photograph taken sitting on it, as if inviting us to take our own seat in this part real and part imagined architecture, fluctuating between presence and absence, past and future, a palimpsest that is both material and memorial. A cast of something that never existed, if not as a memory or a project: something to imagine as possible, and then try to inhabit it. The work will be set up in Pompeii in the coming months, offering further impetus to the project, which at that point will be curated and inspired by new people, their own memories and projects. AV

The research of Gianni Pettena (Bolzano, 1940. Lives and works in Florence) established one of the practical and theoretical foundations of that which, in 1971, the art historian and critic Germano Celant defined as “Radical Architecture”, consisting in a reflection on the very potential of architecture activated and animated by the dialogue between the Florence-based groups Archizoom, Superstudio, UFO, Zzigurrat, 9999 and the Strum Group from Turin. Working on an inclined plane which from the project leads to its realisation, mixing different disciplines such as anthropology, architecture, visual arts, urban planning and social sciences, Pettena has built – more than buildings and objects – an organic critical narration on the ethical and aesthetic value of building, its imaginary and imaginative matrices, its impulses freed from standards by their functions, on the connections that every anthropic element inevitably has also with the environmental ecosystem and all other forms of natural construction. In this sense Pettena is the author of a corpus of works which blend experimental design, installation, performing action and significant teaching activities. In 1971 he was artist-in-residence at Minneapolis College of Art and Design and in 1972 at the University of Utah, from 1973 – in addition to founding the public laboratory system Global Tools – he began working at the Faculty of Architecture in Florence where, until 2008, he taught the History of Contemporary Architecture, while in the 1980s he also taught at the Domus Academy in Milan and at CSU-California State University. His teaching activities have led to the publication of a number of essays, including, in 1973, the first volume L’anarchitetto, an anti-book which links the language of visual poetry to the approach of the live photographic diary in narrative form. His following publications include: La città invisibile. Architettura sperimentale 1965/75, 1983; Radicals. Architettura e Design 1960-1975, 1996; ARCHIPELAGO. Architettura sperimentale 1959-1999, 1999; Radical Design. Ricerca e progetto dagli anni ’60 a oggi, 2004. In 2002 the Frac Centre in Orléans devoted a large retrospective exhibition to him, entitled Gianni Pettena. Le métier de l’architect. At the age of eighty-two, although building little, the “anarchitect” Pettena continues to design. 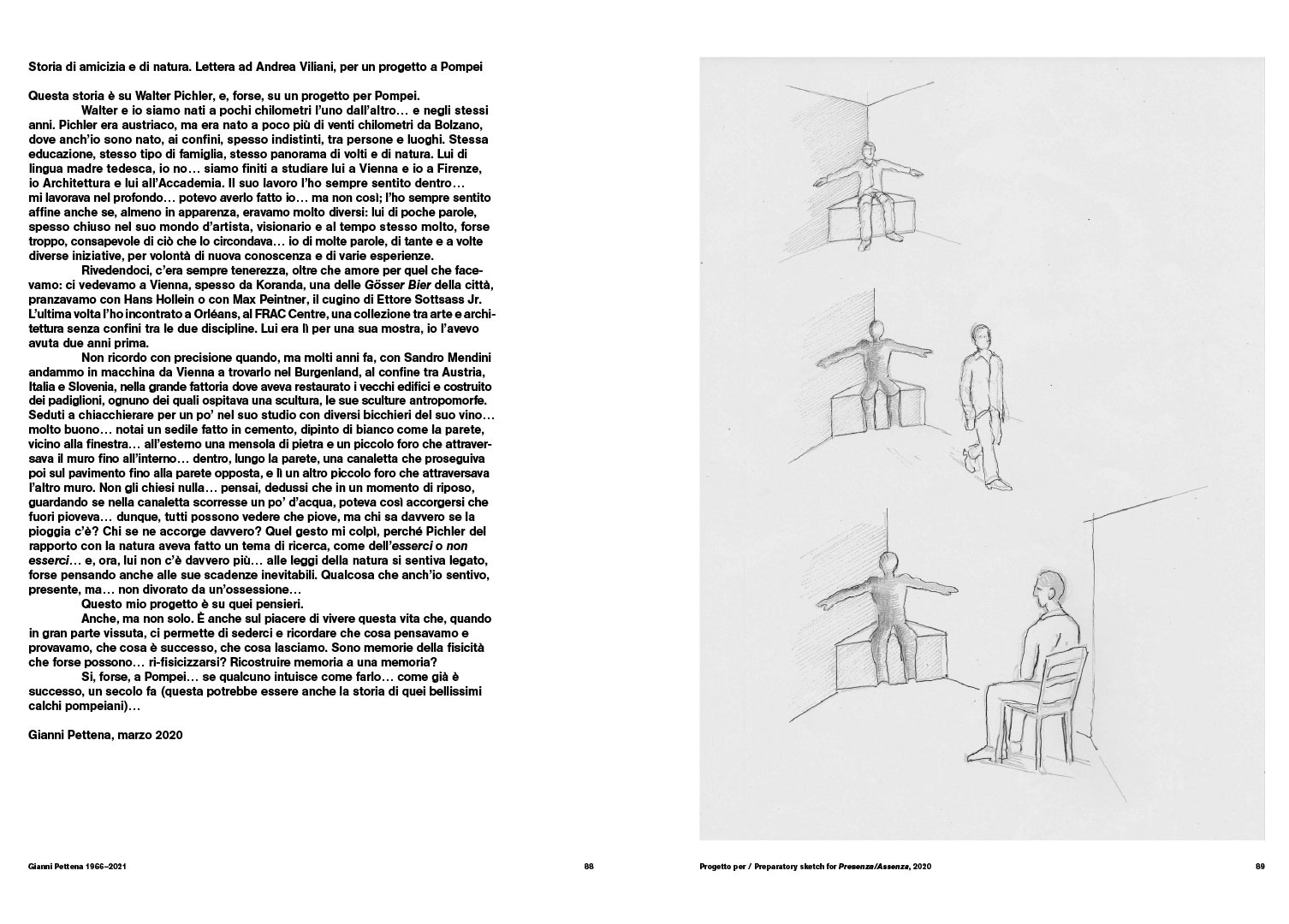 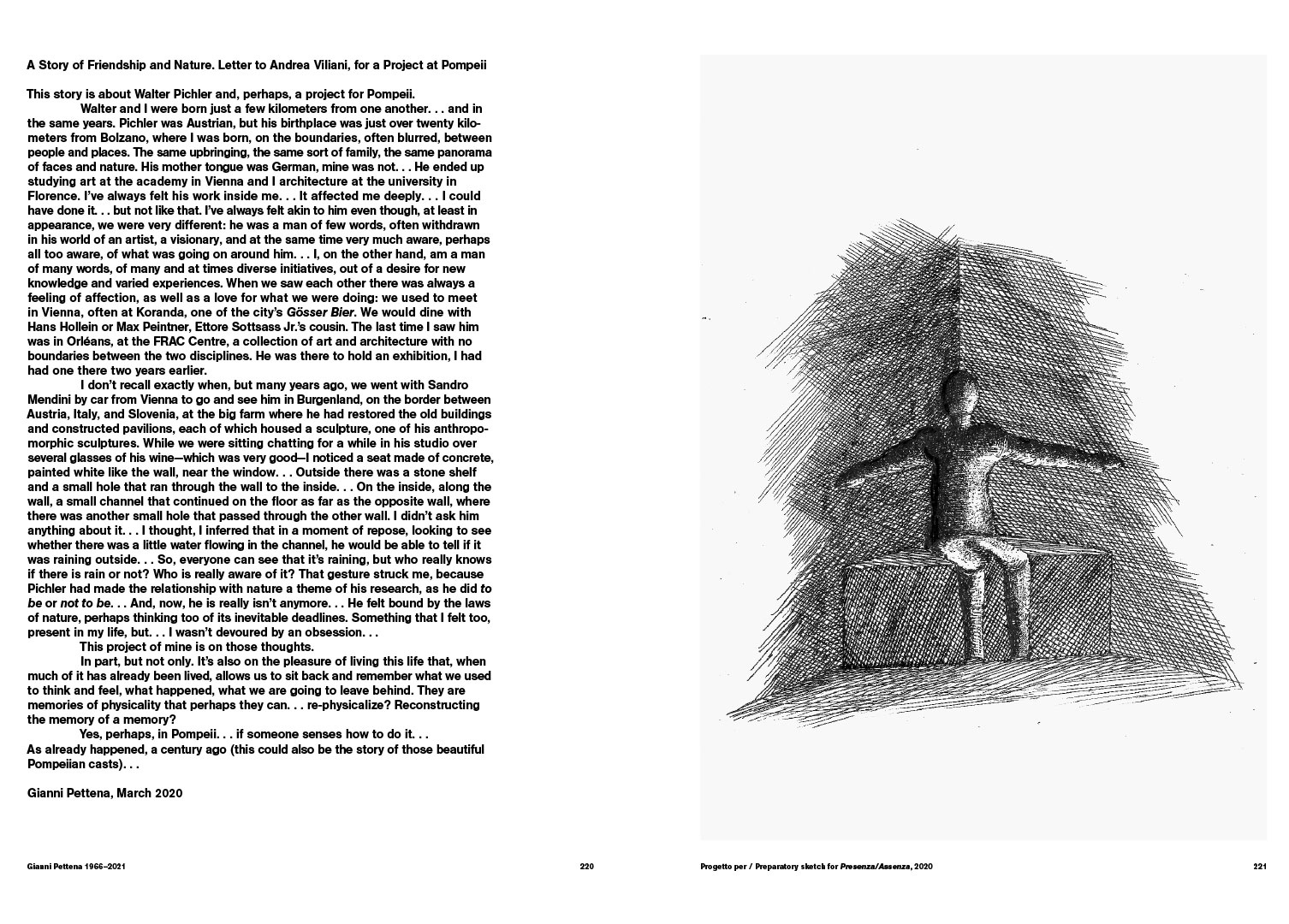