Rhythm, pattern, fragmentation and sutures meet in Haris Epaminonda’s methodology to form systems and spaces of representation creating new timelines and symbolic realms. The artist is fascinated by materials which speak of the solid presence of a past time, near or elsewhere. Repurposed pages from very old books, outdated printed matter as well as ancient artefacts appear in her work which spans films, sculptures, collages and reconstituted publications. Whilst clearly emerging from the histories in which they are grounded, Epaminonda’s subjects and imageries are rearranged out of their original context through the lens of the artist’s present day – as such, they are newly endowed with a contemporary force. Such an attitude evokes the guiding principle of Pompeii Commitment. Archaeological Matters as a research programme which understands archaeology as a potentially contemporary discipline.
Epaminonda was, indeed, featured in the exhibition Pompeii@Madre at Madre Museum in Naples in 2017. Curated by former Pompeii’s General Director Massimo Osanna together with Andrea Viliani, this show is among the fundamental precedents that inspired the vision for the Pompeii Commitment programme. In Pompeii@Madre, Haris Epaminonda presented two works (Untitled #02 a/w and Untitled #07 a/w, both 2016) forming an ethereal environmental installation, seemingly summoned from the bowls of multi-coloured pigments found in Pompeii, or from one of their applications. A detached fresco of a female figure framed by two plant wreaths and carried in triumph by a group of elephants was exhibited in the same room. It was on the occasion of this show that Epaminonda visited the Archaeological Park of Pompeii and shot part of the footage on super 8 film which was later included in her renown work Chimera (2019), premiered at the 58th International Art Exhibition of La Biennale di Venezia, where it was awarded the prestigious Silver Lion. ‘Chimera’ in Greek mythology is a female fire-breathing hybrid monster, with the head of a lion, the body of a goat and a serpent for a tail. Meditating on the overlapping of epochs, places, and memories, Epaminonda’s film is an experimental audio-visual travelogue. Following the rays of the sun and tracing its shadows, it acts as an optical mirage. The film takes as its starting point super8 film footage shot in and around the Californian desert in 2014, most of which was damaged during development. Using this rescued footage, together with shots taken on different travels, including the artist’s visit to Pompeii, the film oscillates between reality and fantasy, nature and culture, light and darkness. Sound and performance artist Kelly Jayne Jones composed and created the ambient electronic score of the film.
Pompeii Commitment presents a special online two-week screening of Chimera (until 16 September 2021), followed by a new contribution by Haris Epaminonda who exceptionally shares a series of film offcuts from the original footage she shot in Pompeii in 2017. Amongst the moving image material, the artist quotes a short poem whose original Latin verses read: Nihil durare potest tempore perpetuo. / Cum bene Sol nituit redditur Oceano; / Decrescit Phoebe quae modo plena fuit. / (Sic) Venerum feritas saepe fit aura levis. (CIL IV 9123) (“Nothing can last forever: / the sun, when its course is complete, / hides itself behind the sea; the moon, once full, now wanes. / Thus, love’s wounds shall heal, / and fresh breezes will blow once more”). These lines were discovered in Pompei on 25 February 1913, on the external plaster of the left side of an entrance doorway. In the winter of 1915, following prolonged torrential rain, the original perished when the wall fell. The poem caught Epaminonda’s attention for this particular history, which is in itself a manifestation of the inevitable passing of time and perishability of matter evoked in the verses. Almost as if the poem had predicted its own destiny. A new collage by the artist further accompanies the offcuts and acts as the cover image of her contribution: a page from an old German publication about Pompeian architecture shows one of the iconic rooms at Pompeii’s Villa of the Mysteries. An apparently simple yet sharp choreography of cutting and pasting turns the floor into a portal offering a serene view of the Vesuvius in a moment of calmness, perhaps a glimpse of a quiet time about to break into disaster. SB 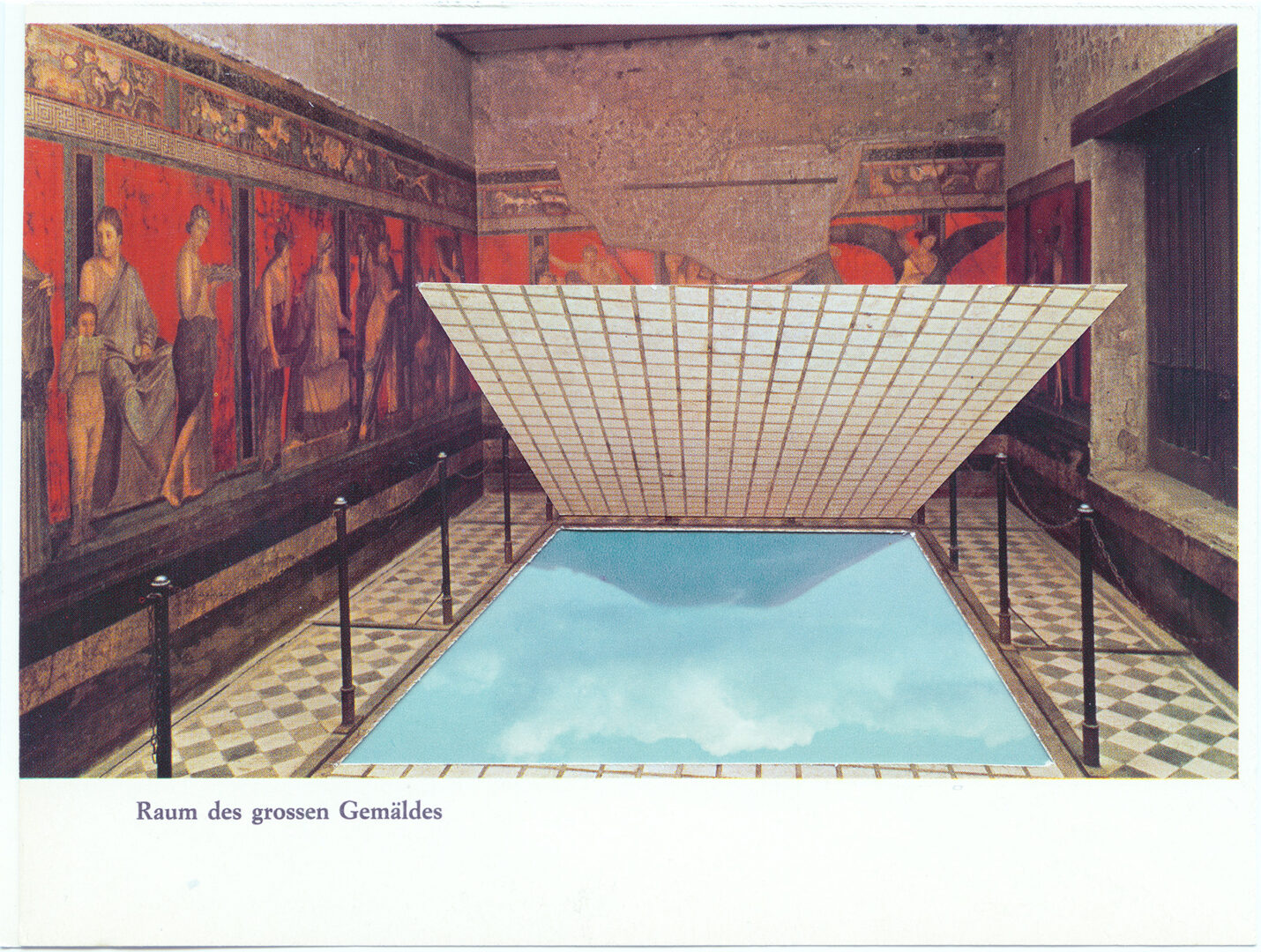